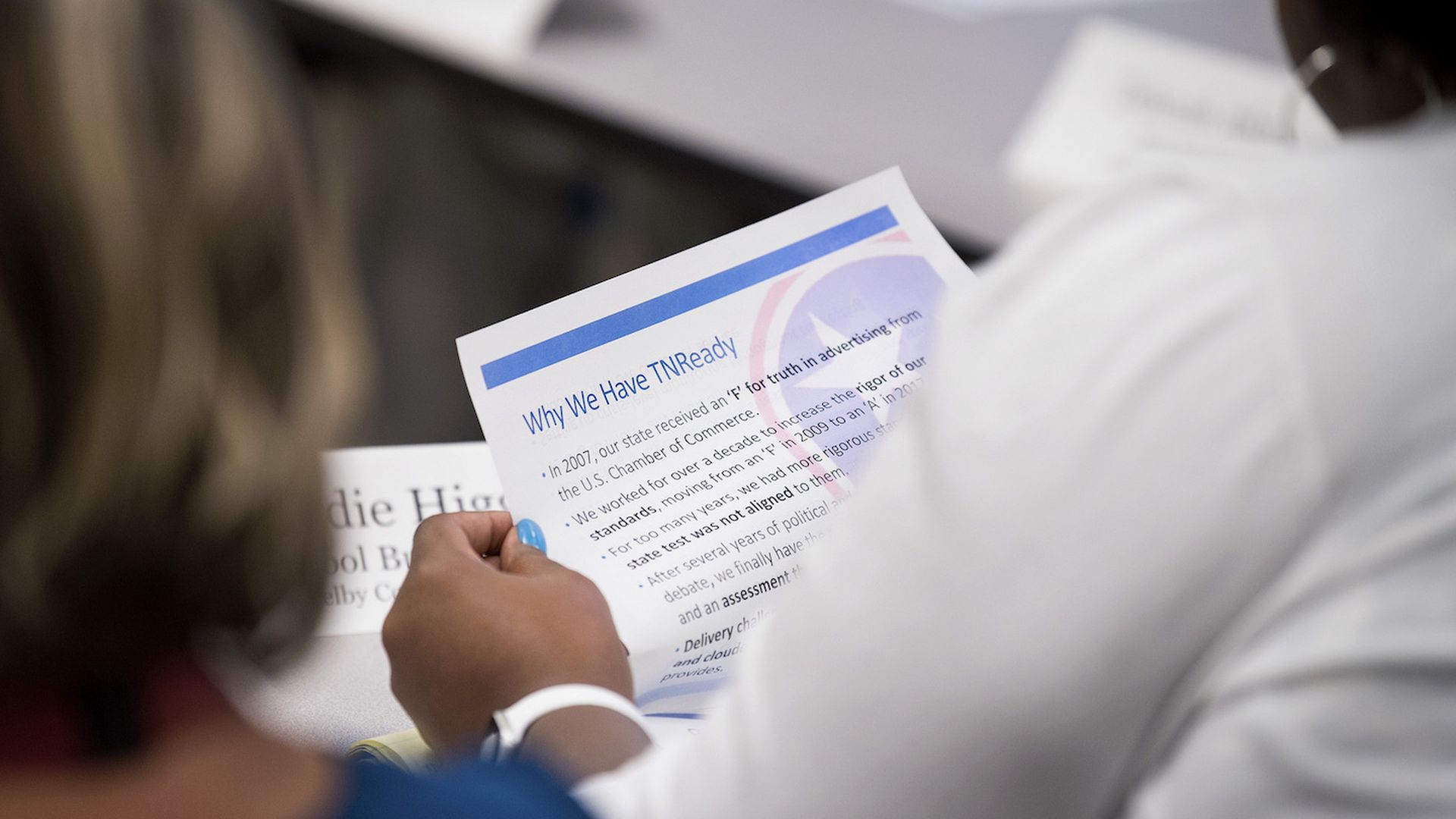 TNReady is Tennessee’s annual standardized assessment to measure how much students know in math and English language arts. | TN.gov

Tennessee’s simmering debate over standardized testing is heating up during the pandemic as key education groups clash over whether the state should remove the burden of testing from school communities for a second straight year.

Groups began lining up both for and against testing after Superintendent Joris Ray, who leads the state’s largest district in Memphis, announced Monday that he will petition Education Commissioner Penny Schwinn to take steps to drop the annual assessment known as TNReady in 2020-21.

The developments follow years of passionate debate about the role of standardized testing, especially how Tennessee uses the results to hold teachers and schools accountable. The discussion has quickly become super-charged as educators prepare to balance instruction with the health and safety of their students amid the coronavirus.

Similar conversations are happening nationwide. In Michigan, Detroit-area superintendents urged state leaders this week to cancel testing. And last week, officials in Georgia asked the U.S. Department of Education to waive the federal testing requirement for another school year.

“If we took away all of the stress that comes with standardized testing, teachers would have a safe space to focus this year on the academic, social, emotional, health, and safety needs of our students. We need that now more than ever,” said Beth Brown, president of the Tennessee Education Association, mirroring a similar call from the Professional Educators of Tennessee.

But several advocacy groups say it’s not time to retreat from state testing, especially since the school year hasn’t even begun.

Leaders with the Memphis Education Fund, TennesseeCAN, and the State Collaborative on Reforming Education, known as SCORE, say another year without testing data would deepen a void in important information about how much students are learning — or not learning — during the unprecedented disruption to education.

Schwinn offered her first comments about the intensifying debate on Friday, urging patience for discussions to come and calling for a laser focus on reopening schools safely.

“I think it’s premature to make a call about testing in June, just weeks before schools reopen,” she said. “And I think that any possible conversation about an assessment that’s 10 months away is not our priority right now. Our priority is to keep our students and staff safe as they go back to school.”

Schwinn noted that Tennessee has a long commitment to testing-based accountability systems.

“We must be able to measure how our students are progressing to know where they need support, and the state remains committed to providing this critical data to educators and families,” she said.

The commissioner has the authority to request a federal waiver on testing, but it’s up to the legislature to decide whether to cancel the assessment, as lawmakers did in March for the 2019-20 school year.

Rep. Mark White, who chairs the powerful House Education Committee, said the legislature currently has no appetite to take up that matter.

“We need to get back into school and see what it looks like and take it from there,” said the Memphis Republican. “We have enough on our plates right now with just reopening schools safely. We’ll address TNReady testing when the time comes.”

The legislature adjourned just last week and isn’t scheduled to convene again until January. But the governor could call a special session this year to deal with issues related to COVID-19, which could include TNReady. Lawmakers also could take up the matter in the winter before most state testing is scheduled to begin.

In Tennessee, TNReady tests in grades 3-8 and end-of-course exams in high school are the only statewide measures of student, teacher, and school performance. Most are required under federal and state law for accountability. Administering the tests is also tied to federal education funding.

The state already paid millions of dollars to Pearson, its testing company, to produce tons of TNReady tests and materials that didn’t get used in the spring. Those printed materials are in storage and likely would be used for a 2020-21 administration.

One option is to administer TNReady to gauge student learning without tying the results to final student grades, teacher evaluations, or interventions for low-performing schools.

“I’m open to using it as a diagnostic tool,” White said, emphasizing that the decision would depend on how disruptive COVID-19 is in the coming months. “I think it’s jumping the gun to talk about this now. We have other more pressing issues.”

“Right now, most of our superintendents are focused on the safe opening of schools for our students and staff,” Lynch said. “I do think we need to have a conversation around state assessment, but that probably needs to be down the road.”